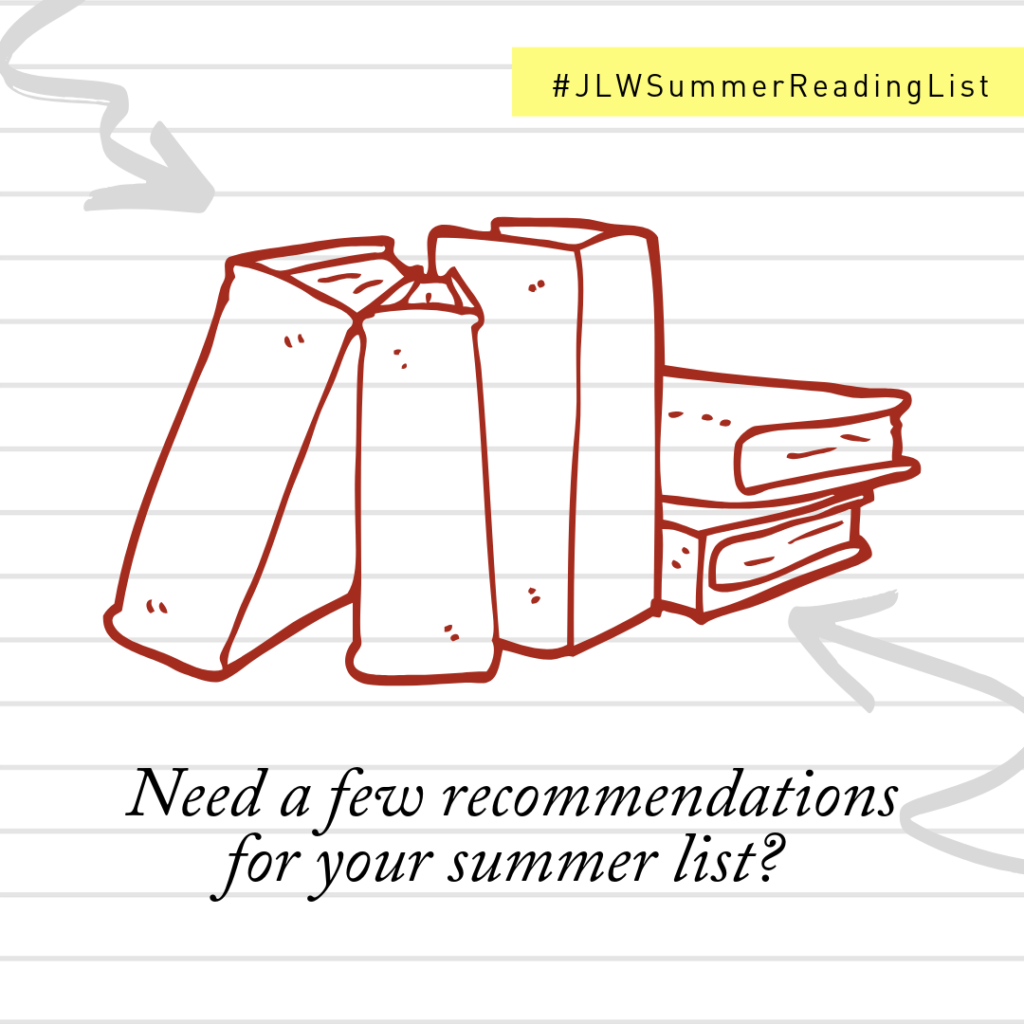 It’s summer, and the Junior League of Washington (JLW) is celebrating 20 years of literacy as our focus area, so what better way to help you get through the next two months with 20 books you should add to your reading list?

Members of the JLW Board, JLW staff and our Literacy Anniversary Committee shared a book they think you, your friends, or your family would enjoy this summer, along with a few thoughts on why they recommend the book, or what the book means to them.

So check out our #JLWSummerReadingList!

Book Recommendation from President Carly Mitchell: Love Walked In by Marisa de los Santos
“This is a fantastically written story of unlikely friendships, love, and family. A multi-time National Book Festival featured author, Marisa de los Santos, has a way with words that immediately draws you in. I love many of her books – largely because I become quickly attached to her characters. It is rare for me to read a book more than once, but I have read this one at least three times!”

Book Recommendation from President-Elect Jessica Taylor White: Pig the Pug by Aaron Blabey
“Pig the Pug is currently in the top bedtime story rotation because my 3-year-old son Andrew can’t get enough of Pig’s silly antics. Even though we know the punchline, we have a great belly laugh each time with this book. We love the entire Pig the Pug series and have lots of fun with these books.”

Book Recommendation from Secretary Kimberly Price: You are a BADASS: How to Stop Doubting Your Greatness and Start Living an Awesome Life by Jen Sincero
“We all need a little reminder that we are awesome, badass women and can do anything we put our mind. Also, the reminder to ‘Love Yourself’ is something we all need to hear and tell ourselves and others often.”

Book Recommendation from Treasurer Amy Shuart Gingrich: The Mists of Avalon by Marion Zimmer Bradley
“This is a great summer read and gives a different perspective on the legend of King Arthur by telling the story from the perspective of a woman.  Bonus – there are some great themes on leadership and destiny versus choice.”

Book Recommendation from JLW’s Manager of Donor Development and External Affairs Terry Algire: Team of Rivals by Doris Kearns Goodwin
“How can you not love and study history! This is my summer re-read because the book explores an important time in U.S. history and the unique leader who created a team from those who at first saw no value in his leadership.”

Book Recommendation from Communications & PR Council Director Tara Andersen: Boom Town: The Fantastical Saga of Oklahoma City, Its Chaotic Founding, Its Apocalyptic Weather, Its Purloined Basketball Team, and the Dream of Becoming a World-class Metropolis by Sam Anderson
“You don’t have to be from Oklahoma to enjoy this hilarious and poignant look at ‘the great minor city of America.’ The book juxtaposes the chaotic founding and hard-to-believe history of Oklahoma City with the story of the Oklahoma City Thunder’s 2012-13 season. The writing is superb, and his chapters on the Oklahoma City bombing and the 2013 tornado that tore through Moore (a close suburb of Oklahoma City) were especially well done.”

Book Recommendation from Sustainer Chair Sarah Carey: Quiet: The Power of Introverts in a World That Can’t Stop Talking by Susan Cain
“I found that so many of the stories within this book resonated with me. Successful connections with people are rooted in a shared goal of understanding; read this book to embrace your own introverted self (like me!) or simply to learn more about the power of quiet.”

Book Recommendation from Recording Secretary Michelle Freeman: She Would Be King by Wayetu Moore
“This debut novel by Ms. Moore is an extraordinary tale of uniquely gifted and strong women. They differ from the norms in their ability to thrive and persevere despite untenable odds. The book’s title is a nod to the fact that if these women were men, they would be kings. It’s a story of empowerment and inspires women to lead; regardless of traditions and mores. I highly recommend!”

Book Recommendation from Youth & Family Community Placements Council Director Carolyn Lowry: Bad Blood by John Carreyou
“This page-turner tells the story of the rise and fall of Theranos, the infamous biotech start-up, and its founder Elizabeth Holmes. In addition to a fascinating storyline (so good that there are plans for an upcoming Jennifer Lawrence movie!), the book shows what can go wrong with massive fraud, weak corporate governance, and a ‘fake it ‘til you make it’ mentality.”

Book Recommendation from Parliamentarian Maria Marks: How Soccer Explains the World by Franklin Foer
“For me soccer is my addiction, having played the game since I was a child. However, it’s more than a game as soccer can symbolize cities, and regions as well as countries. This is another look at the beautiful game and the fans who support it around the world.”

Book Recommendation from Nominating Committee member and 20th Anniversary of Literacy Co-Chair Ashley MacLeay: Where the Crawdads Sing by Delia Owens
“The book follows the life of a young North Carolina girl from the 1950s-1970s. Readers share in her struggles as she goes from being an abandoned child to a successful woman who has come into her own. Intermixed throughout the novel is a love story and murder mystery. Loving this book was unexpected, like many of the twists and turns in this novel!”

Book Recommendation from Ways & Means Council Director Sara McGanity: The Library Book by Susan Orlean
“Libraries are an oasis teeming with more than just books to be read: they’re a place where your imagination can soar! In Susan Orlean’s account, you’ll quickly discover that this is more than just a book about books – it also dives into the evolution of libraries and the people dedicated to preserving these educational and cultural beacons (even after a fire)!”

Book Recommendation from Adult Community Placements Council Director Colli McKiernan: Matilda by Roald Dahl
“Matilda was the first chapter book I read as a child. I looked up to Matilda because of her voracious love of literature and intrepidity in challenging times. I also tried quite hard to mimic Matilda’s telekinetic powers (but somehow never figured it out…).”

Book Recommendation from Nominating Committee Chair Carrie Meadows: Pride and Prejudice by Jane Austen
“Pride and Prejudice is one of my all-time favorite books. I always come back to either my well worn paper back or the audible version. I highly recommend this classic!”

Book Recommendation from 20th Anniversary of Literacy Co-Chair Samantha Nagle: Daring Greatly by Brene Brown
“Daring Greatly is a nonfiction book that teaches the reader about the power of vulnerability. Brown’s message focuses on how being vulnerable is actually courageous in a world where everyone appears confident. I really enjoyed this read and it taught me that being vulnerable is not a sign of weakness but one of strength and can lead to being a more genuine leader.”

Book Recommendation from Community Affairs Council Director Alison Ottenbreit: The Georgetown Ladies Social Club by C. David Heymann.
“A historical account of social life in Georgetown and how it intertwined with politics in the mid 40s to 60s. Full of intrigue, scandal, and the fabulous, wealthy Georgetown set. Learn how the wives of powerful men made their mark.”

Book Recommendation from New Membership Council Director Katherine Rodriguez: Educated, A Memoir by Tara Westover
“It’s an unforgettable memoir about a young woman, who against the peculiar circumstances of her upbringing, managed to carve out an education for herself and become an accomplished scholar. It shows the value of education, perseverance, and creativity. You’ll want to read the book as fast as you can to unlock all of her past and how she did it.”

Book Recommendation from Cultural Community Placements Council Director Deena Smith: Never Caught: The Washingtons’ Relentless Pursuit of Their Runaway Slave, Ona Judge by Erica Armstrong Dunbar
“When George Washington died, he freed all of the enslaved people he owned. However, he could not free the enslaved people from Martha Washington’s first marriage. Never Caught tells us the story of Ona Judge Staines, a woman who cannot be defined by slavery. Backed by impressive research and primary documents, we learn about relationships at Mount Vernon, as well as the day-to-day workings of Washington’s homes in New York and Philadelphia. We learn more about Black society in Washington, DC (including Georgetown). We learn about Oney’s sacrifice and how those choices affect her family, husband, and children. Most impressively, we hear Ona’s story from Ona’s perspective, understanding her life as a free woman who refused to return to slavery. Her freedom perplexes and embarrasses those who wish to enslave her.”

Book Recommendation from Membership Development Council Director Chloe Taylor: The Moment of Lift by Melinda Gates
“The Moment of Lift is an inspiring read about how empowering women can change society and the world for better. It looks at the causes Melinda Gates is passionate about and some of the other women she considers heroes.”

Book Recommendation from Strategic Sustainability Council Director Bridget Westfall: Eunice: The Kennedy Who Changed the World by Eileen McNamara
“I’ve always admired the late Eunice Kennedy Shriver, but never realized her major contributions to one of the greatest civil rights movements in modern history: including children and adults with intellectual disabilities in education, work, and community living. Mrs. Shriver’s Catholic social justice teachings and experience with her own sister, Rosemary, led her to create the Special Olympics and use her family’s fortune and political power to advocate for people with disabilities when government and society had marginalized them.”