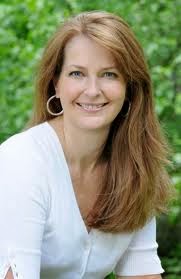 Summer may be winding down, but that book you can’t put down doesn’t have to be packed away with your shorts and sandals. International bestselling author Sarah Pekkanen writes those books. Pekkanen’s women’s fiction—or “chick lit”—genre of books are guaranteed to be a good read year round.

Her latest book, Catching Air, is the fifth of her published works. Hoda Kotb of the Today Show said she was “flying through the pages” and People magazine remarked, “Pekkanen’s wry voice and engaging characters keeps things fresh.” Other works by Pekkanen include These Girls, Skipping a Beat, The Opposite of Me and The Best of Us. Her next novel is due out in spring 2015.
As a mom of three boys she says she has penned at least half of one of her books inside of Chuck E. Cheese, literally, and got her start at the ripe age of 10. She also has worked as an on-air correspondent for e! Entertainment Network and for multiple metro area newspapers covering the Capitol Hill beat and as a freelance writer.

Pekkanen will answer questions from JLW members as one of the four female, Washington, D.C.-based authors at the Book Club Kick-Off, which will be hosted at JLW Headquarters in the Loughborough Room on September 23 at 6:30 p.m. Other authors include Judy Bachrach, Monica Barnett and Amie Parnes. The event will also include food, beverages, book sales benefitting the League and plenty of time to mingle with other women participating in this year’s book clubs. If you’re interested in attending the Book Club Kick-off event, please RSVP here.