On Monday, September 14, the Junior League of Washington’s (JLW) Esprit Committee hosted a virtual Neighborhood Party. The event boasted over 80 attendees, which in a time of Zoom fatigue and constant moans of “You’re still on mute,” may seem daunting; however, the Esprit Committee handled the event with aplomb!

As anyone who has attended a virtual social event in 2020 can attest, chaos can occur as more people click to join. In order to solve this problem and 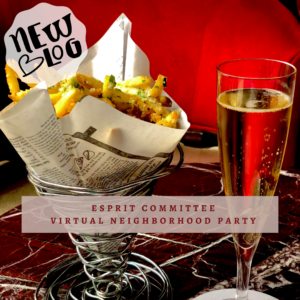 Even though the larger event was broken into smaller breakout rooms, it was still vitally important for the committee to ensure attendees were actively involved and having fun.

“We had some committee members help to facilitate the event from their own respective neighborhood. I broadcast discussion questions to each neighborhood via the chat function in Zoom to help spur conversation,” explained Samantha Brainard, Esprit Committee Chair.

While September’s Neighborhood Party was the committee’s most attended event of 2020, the sheer volume of attendees wasn’t at the forefront of the chair’s mind when she reflected on the success of the event. “The goal for the Membership Development Council and for Esprit specifically this year is purposeful member care. If we had two people attend, we would have considered it a success because we were reaching those two members,” said Brainard.

Despite that outlook, however, it was rewarding to see all of the committee’s hard work pay off. “This event took a lot of prep work to make sure that we put people in their respective neighborhoods,” admitted Brainard. “Once we did the prep work, hosting the Zoom was easy!”

The Esprit Committee received a lot of positive feedback from other League members as well. For some, it was all about getting recs to make staying home full time a bit more bearable. “Getting to connect with women in my neighborhood provided a great opportunity to talk about social distancing, take-out, and local food spots, among other topics,” said one event attendee who submitted her feedback in an anonymous poll conducted after the event.

For others, it served as a great way to network. “The neighborhood party provided an opportunity to connect with a small group of League members in my neighborhood that I would have otherwise likely not met,” said another event attendee.

Fortunately, for those who were unable to attend in September, there is another Neighborhood Party slated for January. Esprit believes this event will provide an even better experience now that the committee knows what kinks to iron out. “We learned that smaller breakout groups are better for conversation. We had some neighborhoods with more people than others, so we’ll probably break them in half next time,” said Brainard.

Brainard, like many other committee chairs in JLW, has been quick to adapt in order to continue providing quality programming despite difficulties. “There are benefits to virtual events and there are benefits to in-person events. All that matters is that we’re providing the opportunity for members to engage with each other” shared Brainard with an air of positivity.

For members looking to attend January’s event, keep an eye on future issues of League Lines’ email newsletter or the Facebook JLW Member Exchange for details!