The page has turned on the Library of Congress’ 2015 National Book Festival, and Junior League of Washington volunteers were an important factor in the festival’s success.

This year marked the 15th National Book Festival and the 13th year the JLW supported the event by providing volunteers. This year also represented the 200th anniversary of the Library of Congress’ acquisition of Thomas Jefferson’s library, and fittingly, the theme of the festival was “I Cannot Live without Books,” a quote from Jefferson. Over the course of the day, JLW volunteers saw the festival theme in action as up to 150,000 attendees flooded the Washington Convention Center to meet their favorite authors, interact with librarians from across the country, get books autographed and celebrate their love of books. If that seems like a lot of attendees, it was—the festival doubled its attendance from last year.

Since moving from its original home on the National Mall, and marking the second year at the Washington Convention Center, the festival continues to grow and evolve. It has moved from two days to one action-packed day, and this year, the number of authors at the festival increased to 175, the most in festival history.

The JLW continues to grow alongside the Library of Congress, as it builds upon its relationship with the festival. For the first time, the JLW was featured as a contributor to the festival on the event poster, recognition of the League’s ongoing role as the largest providers of volunteers for the festival.

This year, 400 enthusiastic volunteers contributed more than 2,000 hours of service on Sept. 5. The volunteers were in action for an extended day this year, staying until 8 p.m. to manage book signing lines and book sales. 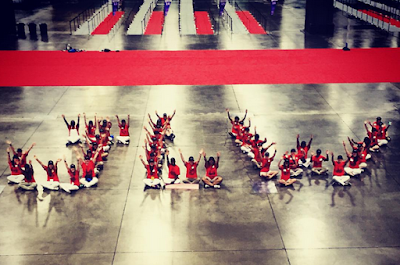 What allows the JLW to continue its partnership with the National Book Festival is the quality of the volunteers. During the festival this year, League women aided librarians from across the country in the Pavilion of States, helped keep the crowds under control in the book sales area, and expertly handed long lines and eager fans in the book signing lines. And if you ever wondered what happens when you cross a children’s author with an astronaut who has walked on the moon, ask the volunteers who were tasked with keeping Buzz Aldrin’s fans in line.

The hard work and positive attitudes displayed by our volunteers did not go unnoticed. Marie Arana, co-director of The National Book Festival and senior advisor to the U.S. Librarian of Congress, said after the festival, “You are the rock on whom we depend! Thanks so much for yet another year of wonderful teamwork. Your members are not only gracious and efficient, you’re all so well informed about books. We love that.”

National Book Festival Co-director Guy Lamolinara said, “[We] could not be more pleased with how the festival unfolded, and this is due in very large measure to the enormous contributions of the JLW… we simply could not have the festival without you. We look forward to 2016.”

JLW even had one festivalgoer stop by the League’s table to share how amazing they thought our volunteers are, and that we don’t get enough credit for what we do. While credit and praise is great, it’s not why we do it. JLW volunteers spent their Labor Day Saturday making sure that everyone—authors, fans and parents with kids—had a great experience at National Book Festival because we know how important it is to promote literacy in our community. JLW volunteers managed crowds with grace and a smile because we understand what Jefferson meant when he wrote, “I Cannot Live without Books,” and if we can make just one other person feel that way, then that makes the festival a success in our book.