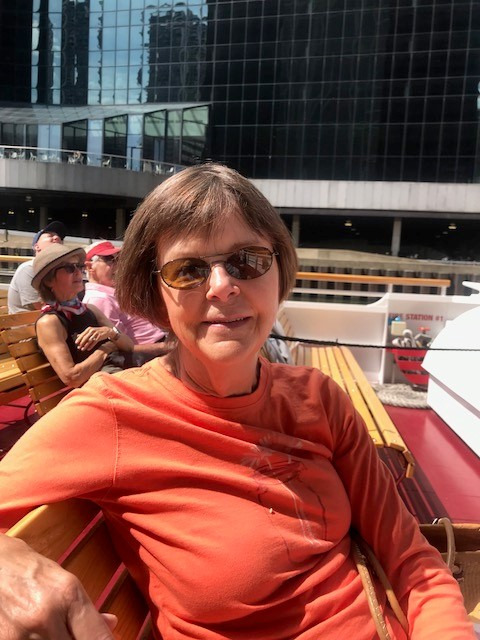 Tina joined the Junior League in 1976, and previously served as the 1985-1986 JLW President and served as Chair of the  Development & Training and Strategic Planning committees, among many other JLW positions. Tina had a lengthy career focused on healthcare financing and quality improvement, domestically and internationally, including USAID.

What is your favorite local hidden gem?

The Potomac Boat Club. It is a great, old house with a big porch and, I think, has the best view in the city. I could sit there and watch the river all day long, particularly when having a picnic lunch and a glass of wine with my husband.

I do. I didn’t start rowing until the age of 60, when I joined a rowing group for survivors of breast cancer. I not only row by myself, but also in 4+ or 8+ woman boats. There’s nothing like being out on the water. I love it!

I understand that, among your many JLW accomplishments, you were personally involved with an effort by the JLW to increase diversity within its membership.

I was indeed. When I was on the JLW Board as head of Development & Training, the AJLI launched an initiative to increase diversity in the League. I knew that achieving racial and religious diversity in the League would make it an even more vibrant and effective force in the Washington area. So, I began to think about how I could help to achieve this goal.

I was serving, at that time, on a community board with several African-American members, one of whom was a particularly good friend and also a native New Orleanian, as I am.  While she was over the age for active membership, I asked for her help in direct recruitment of African-American women from her own personal network who might be interested in JLW membership.  She invited her friends (and their daughters) to a tea at her home to meet me and the leaders of the JLW to hear about the mission of the Junior League and its work in the Washington community. Through this event, a number of African-American women learned about, and subsequently joined, the JLW.

While the JLW had African-American members prior to this, my friend Marie Burbridge really gave the League the big boost it needed, and then other efforts began to take off. It goes without saying that a more diverse membership has enriched every aspect of the JLW’s community impact!

What lesson have you learned from the JLW that you have applied to your professional and personal lives?

There certainly is more than one, but I particularly recall my participation in the JLW Facilitator course. Not only did I develop lovely friendships, but it also improved my understanding of management. In particular I recall the wise guidance summed up as “people support what they help to create.” I continue to rely on this insight into my retirement!

When you think of JLW, what comes to mind?

I feel a great sense of pride in what the JLW does in DC and also think immediately of my connection to my cherished League friends. The history of the Junior League, in general, is one of recognizing social issues within one’s own community and building on the unique abilities of women to improve these communities and promote volunteerism. I think of the JLW as a training ground for women who make an impact beyond the JLW in their communities. For example, many years ago I was recommended by a JLW friend as a candidate to serve on the board of directors of a community organization and was able to take my JLW training to that board and also take what I learned on that board into my professional and volunteer life.

You mentioned that you are from New Orleans.  What are some “can’t miss” spots for someone traveling there?

Well, certainly there is lots to see in the French Quarter – Preservation Hall to hear great jazz (the music of New Orleans is in my blood), Jackson Square (the cathedral and street performers), Café du Monde (for beignets), and good food everywhere you turn!  But I really love Audubon Park. You can take the St. Charles streetcar and get off at the University.  From there you can walk around the lagoons and golf course under the shade of the huge oak trees, wander up to the zoo and walk back via the labyrinth that was built as a healing place after Katrina. There are also great walking tours of some New Orleans neighborhoods – like the Garden District and Uptown (where Audubon Park is located). Going on a cemetery tour is very interesting as well and very specific to New Orleans.

One of the most important benefits of membership in the JLW is the lifelong connections to the JLW community and to women who care about serving the Washington, DC, area. Our members, after a minimum of seven years of active JLW service, may choose to go to sustaining membership status. The JLW is deeply grateful to our sustaining members who have given their time, financial support, and leadership skills to improve both the League and our community. Sustainers use their Junior League training and experiences to share with other community organizations and within the League to help New, Transfer, and Active members grow within their roles.