More than likely, you have heard of human papillomavirus, or as it is more commonly referred to, HPV.  It’s now known that approximately 20 million Americans are currently infected with HPV, while another 6 million people become newly infected each year. While there are now vaccinations available to help prevent HPV, there is no treatment for the virus itself.  As scary as it sounds, HPV is so common that at least 50% of sexually active men and women get it at some point in their lives. 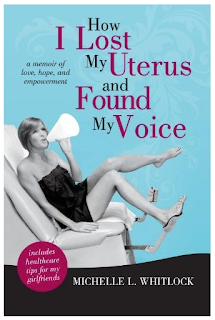 What’s even scarier? Sometimes HPV can lead to Cervical cancer.   Each year, about 12,000 women get cervical cancer in the U.S. Almost all of these cancers are HPV-associated. Cervical cancer usually does not have symptoms until it is quite advanced. For this reason, it is important for women to get regular screening for cervical cancer. Screening tests can find early signs of disease so that problems can be treated early, before they ever turn into cancer.

On Monday, May 14, the JLW will host Michelle L. Whitlock, author of How I Lost My Uterus and Found My Voice.  At age twenty-six, Michelle thought she had it all: she was in the best physical shape of her life, she had a promising career, and she had a budding romance that looked like it could finally be the real thing. Then doctors informed her that she had HPV. Weeks later her worst nightmare became her reality when she was diagnosed with invasive cervical cancer. In her memoir, Michelle recounts how she took charge of her healthcare and pursued an experimental surgery that treated the cancer while preserving her fertility. The surgery was a success, but just years later—a week after the love of her life proposed—Michelle discovered her cancer was back. How I Lost My Uterus and Found My Voice follows Michelle as she wonders if she will live or die or have children. This is one woman’s story of falling in love, battling HPV and cervical cancer, facing sexual dysfunction, confronting her conflicting feelings about motherhood, and becoming her own best advocate. Inspirational and honest, this memoir tells the emotional story of love, loss, resilience, and survival.

This is an important topic that likely could impact you, a friend, a family member, or a colleague.  Please join us for this important D&T on Monday, May 14th, at 7:00 p.m. at the offices of Winston & Strawn, 1700 K. St. NW.

You can RSVP on the JLW site.  This event will be the last opportunity for a membership credit for the 2011-2012 year.