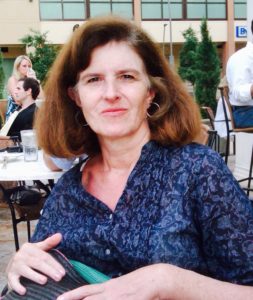 Junior League of Washington (JLW) Sustainer Lee-Lee Prina has been the face of beloved member column Who’s News since the 1980s. Through the decades, she has announced countless life events for fellow League members and has seen it all! We wanted to peek behind the curtain and learn more about Lee-Lee and how she’s seen JLW evolve from her vantage point.

Who’s News is our very own Page 6! How do you collect news and updates?
Most of the news comes in “over the transom” (that is, by email sent to whosnews@jlw.org). And our current JLW president Elizabeth Keys is very diligent about sending me scoops! Occasionally, I read something elsewhere about a member and then attribute the news to the other publication and quote from it! In the “olden days,” people would call me; I would also make cold calls to members to see if they had any news.
Tell us a little more about yourself – how long have you been in the League? What brought you to the DC area?
I have been in JLW since about 1980 and became a Sustainer around 1996. While I was never a committee chair or council director, I was elected to the Nominating Committee twice! (Editor’s note: Now, being a chair is a prerequisite for serving on Nominating.)
I was born and bred in DC (not suburbs!) and am an only child. My late dad was a news reporter here, and my mother is a retired freelance writer (and former JLW member!). I have lived in the Washington area all of my life except for a couple of out-of-town internships and four years in New Orleans at Tulane University. Now my husband and I live in Bethesda, near Glen Echo.
I work for Health Affairs, one of the leading health policy journals in the country, as a senior editor. A number of years ago, I cut back to a busy part-time position, so I could help my elderly parents with a variety of things.
How long have you been doing Who’s News, and how has it evolved over time?
I have been compiling and writing the “Who’s News” column since about 1983 or 1984, I want to say. The column started out under the name of “Loughborough Log” (named after JLW Headquarters, of course) and appeared in JLW’s then 2-color magazine called Potomac Pages. It had a good amount of pictures. As I recall, the magazine became too expensive to produce. The column then moved to the former Hotline newsletter, and then to the online League Lines e-newsletter. At some point – though I don’t know why – the column changed to “Who’s News,” which I believe was copied from the name of a column in the Wall Street Journal.
When the column started back in the 1980s, job “networking” among women seemed a big thing. I have continued to ask people (no matter what news they are reporting) whether they work and, if so, where they work and what they do. That person could be a good contact for another JLW member who is job hunting! 🙂
What are some of the most interesting or unique experiences you’ve had in documenting these updates? Have there been any impressive updates or crazy connections?
Our members are doing all kinds of interesting things! I have corresponded with two people serving as Miss DC. I also talked to a member about her husband, who was one of the hostages in Lebanon during the 1980s. Another member was one of the anchors on NewsChannel 8.
One thing members should know is “Who’s News” does not cover engagements or pregnancies. Although most engagements and pregnancies turn out just fine, it is best to wait until everything is a “fait accompli!”
What do you think your readers enjoy seeing in Who’s News?

I would guess that members view it like they do “Class News” in alumnae magazines. They likely want to see what their friends and acquaintances have been doing. Who’s News, of course, is not “gossip” per se: We just publish good/happy news!