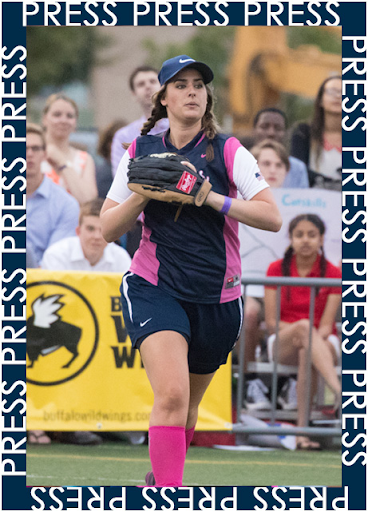 JLW Member and Captain of the Bad News Babes throws a pitch.

For its 12th year, the Women’s Congressional Softball game returned after its 2020 cancellation due to the COVID-19 pandemic.  Though the softball game began as a match between congresswomen and staffers in 2009, it has evolved into a long-standing battle between female congress members and the women of the DC Press Corps, with proceeds going to the Young Survival Coalition. The Young Survival Coalition is a charity that benefits women under 40 as they battle breast cancer, as these women face a particular set of challenges when battling cancer. The Young Survival Coalition states “Unlike their older counterparts – who are overwhelmingly integrated into the design of clinical trials – young adults diagnosed with breast cancer face higher mortality rates, fertility issues, and the possibility and ramifications of early menopause.”

For the 2021 game, the Press Corps’ Bad News Babes was captained by the Junior League of Washington’s (JLW) own Mikayla Bouchard, a managing editor at CNN and formerly a senior editor at The New York Times. As a captain and center fielder, Bouchard works with the organizing committee to plan the annual charity game that pits female members of Congress against women of the Washington Press Corps and raises money for the Young Survival Coalition. She has been participating in the softball game since 2015 in addition to volunteering with JLW since 2016. As an active JLW member, she has participated in Horton’s Kids, the Esprit Committee, and is now the Vice Chair of the Women’s Leadership Breakfast. Clearly, Bouchard has a heart not only for her community, but also for promoting and supporting women in the DC area.

Keep an eye out for the release of the 2022 dates and ticket sales, and for any other JLW members who take the field this year!